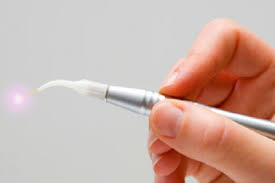 Sometimes, it can be helpful to check the colour and the texture of the gums, since they can reveal us something about our health. Usually, gums are pink, and that’s a clear sign of the good health of the teeth, but they can change their colour because of external factors.

Given that, like any other physical characteristics, the appearance of the gums varies from person to person depending on the skin colour, ethnicity, and the amount of melanin present in the tissues, the colour of the gums may turn from pink to red, to blue and grey. Of course, these changes are not normal if they occur suddenly over time, and the best thing to do is going to the dentist or talk with a doctor.

Anyway, almost all discolorations of the gums can be easily treated by dentistry.

Some types of dental treatment are reported to cause occasionally a change in the colour of the gums. After a dental fillings procedure, some particles of the amalgam can migrate in the gum, so that they can look dark blue or black; this effect is called an amalgam tattoo, is harmless and not need any treatment.

Teeth whitening can change the colour of the gums, due to a chemical burn; this condition is not severe and will heal in a few days. The healing process can be stimulated with hydrogen peroxide rinses mixed with water 50:50 and Vitamin E. Tobacco can cause gums discolorations, as well as some diseases and medications, such as minocycline, antimalarial agents, tricyclic antidepressants. If the gums start changing colour after the patient begin taking a new medication, it is better to speak with the doctor to find out about alternatives.

Poor oral hygiene may be another source of discoloration of the gums.

In particular, there is two kind of pathologies caused by an entirely inadequate oral care: one is an acute necrotizing ulcerative gingivitis, very rare today, that lead the gums to turn grey. The second is the black gum disease, an acute necrotizing periodontal disease; in this case, the tissues of the gums died and became black and appear blunted between the teeth.

Nowadays, there are dental treatments to whiten gums, also only for aesthetic purposes; for example, there is laser gum depigmentation, that uses the laser to remove the external layer of the gums. The new gum tissue created during healing tends to be pink rather than black.

Another procedure is gum bleaching, in which laser is used in combination with a special bleaching solution. Finally, there is the surgical solution, to remove the outer layer of gum epithelium that has dark pigmentation, as the new gum which emerges is usually pink in colour and free of dark pigmentation.