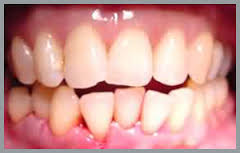 As much as teeth, gums have a basic importance in oral and teeth health and are the same vulnerable to bacteria and plaque. Gums have to be pink and light and don’t have to bleed, unless they are inflamed or worse. Gum disease often is a synonymous of periodontis, an inflammation around the tooth.

According to dentists, patients often don’t care a lot about their gums, since many of them believe that bleeding during brushing or flossing is a common condition; esteems talk about half people over 30 in the United States with bleeding gums, but bleeding and other symptoms may suggest that gums are under bacterial attack and that there is something to change in oral daily care habits.

There are different tissues around a tooth, the alveolar bone, periodontal ligament, cementum that cover the roots and gingiva, or gums, that are the periodontal tissues, as periodontal signifies ‘around the tooth’ and the most common gum diseases are gingivitis and periodontitis, caused by plaque.

Gingivitis is the mild form of gum disease, and it occurs when plaque is not properly removed by brushing or flossing, it hardens and turns into tartar. The gums become red, swollen and can bleed easily. Tartar can to be removed only by dentists or dental hygienist. With gingivitis there is not any loss, of bone, tissue or tooth. If not properly treated, gingivitis becames periodontitis, thus periodontitis are always precede by gingivitis. In periodontitis, gums pull away from teeth and a sort of pockets are formed; these pockets fill with bacteria, and bacterial toxins and the body’s natural response to infection start to break down the bone and connective tissue that hold teeth in place. In advanced stage of disease, the bones, tissues and gums may be destroyed and teeth might be removed.

Along with plaque, other factors can cause gum diseases as genes, when there is a genetic predisposition, bad habits as smoking, poor oral hygiene habits, hormonal changes, illnesses as diabetes or cancer or medications, misaligned or crowded teeth, braces or bridgework, grinding teeth, stress.

Gum disease may have symtoms as bleeding, red, swollen, or tender gums, painful chewing, bad breath or bad taste in the mouth, receding gums, formation of deep pockets between teeth and gums, loose or shifting teeth.

Gum disease treatments focus on controlling the infection and promote reattachment of healthy gums to teeth. There are many different treatments, depending on the extent of the gum disease.